Thursday March 20th saw the start of what Swansea University students hope to be an annual event with the first ever Swansea Charity Fashion Show. Before the show I caught up with the students in charge, Lawrence Porter and Lowri Evans to find out a bit more.

Q: What made you come up with the idea?
Lawrence: It was something I had always wanted to do, over the Summer I began organising it and got backing from organisations such as Gane Trust and Asthma UK. The event is an official Asthma UK event, raising awareness and money for the cause. I am personally affected by Asthma and know that even others who have it aren’t completely aware of how serious it can be.

Q: How did you develop it once you were back in Swansea and really needed to push it within the University?
Lawrence: I think because it’s something which has never been done before in Swansea Uni and we really hit a niche, everyone was really willing to get involved. Lots of the University societies wanted to take part and when we asked for extra help back stage we were overwhelmed with the response.
Lowri: We followed the motto ‘they can only say no’ and most people said yes!

Q: Is the show following a particular theme?
Lowri: There’s going to be a Parisian theme to the show. We also got local vintage shops and high street names to contribute and help us so that we are able to showcase a student style and show students that this kind of fashion is available to them.

Q: Which high street names are involved?
Both (speaking in turn): M&S, Arcadia, Debenhams, ASOS, Benefit (who are also doing the make-up) and loads more. Some have helped by donating clothes and others have donated raffle prizes and treats for the goodie bags.

Q: Finally, how big do you expect the show to be?
Lawrence: It’s taking place in the Grand Theatre and so far all indications are pointing to it being a sell-out, so around 150 people.

On the 20th March at 8pm the Grand Theatre in Swansea was packed out to capacity. The show began with a welcome from a member of the fashion committee and then the catwalk began. Models showcased six different styles all with clothes donated to the show; these styles were preppy, varsity, arty, sk8er, Parisian and grunge. The show was also laced with performances from the Swansea University Dance Society and the beautiful voice of Opera singer Lois Williams. 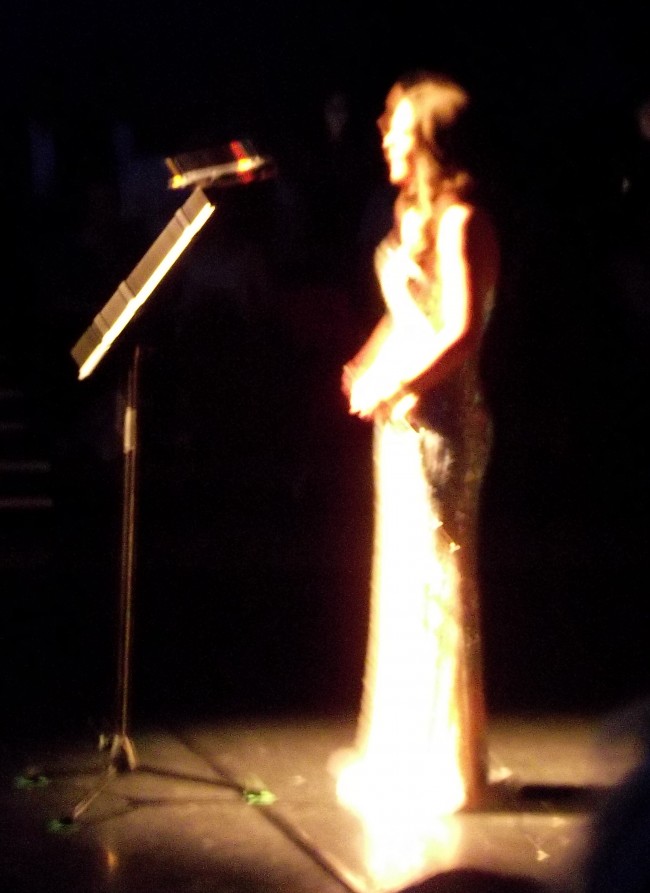 Speaking to the organiser, Lawrence Porter, after the show he said he was ‘really pleased’ and ‘quite emotional.’ The show was a huge success for Lawrence and Lowri along with everyone else who helped and has so far raised over £1000 for Asthma UK. The society now are looking forward to next year!

If you can’t believe you missed out on it and want to hear all about the best bits have a look at this:

Expanding from the choice of jumpers which were available to purchase before Fulton Outfitters, the University now also offers shorts, t-shirts, gifts and cards within the store. All the clothing follows a ‘comfortable, but cool’ style, meaning it’s perfect for students in University who are either hungover or just don’t want to be worrying about skin tight t-shirts cutting off the circulation during their lectures.

Fulton Outfitters stocks University merchandise as well as cool gifts for everyone. Photo by Emily Pumford

What’s more, Fulton Outfitters regularly changes its stock to keep up with the latest trends and give more options to the students. Over Christmas, they even made sure to keep up with the growing Christmas jumper trend and introduce a unique Swansea University Christmas Jumper. They are also famous for the ‘Swonsie,’ an exclusive onesie using the University branding – you won’t get that in any other Uni!

The style and layout of the shop gives it a real homely ‘just walked into your own bedroom’ feel and all clothes and gifts are reasonably priced, with hoodies starting from just 15.99 and other products being even cheaper. You couldn’t get a jumper for that price from anywhere else on the high street so for student budgets and styles Fulton Outfitters really is a great edition to the campus.

Fulton Outfitters can be found on the ground floor of Fulton House, opposite Costcutter and next door to Blas (two other retailers which were part of the major redesign in Fulton.) The shop is open from 10AM to 5PM, Monday-Friday during term time and 10AM and 3PM, Monday-Friday out of term time.

Vintage clothing has become increasingly popular over the past few years and is a great way for students to have a creative wardrobe without spending too much money. It’s become easily accessible recently with online marketplaces such as ASOS and Amazon creating individual vintage sections of their websites. More importantly for students of Swansea, there are some fantastic vintage shops selling reasonably priced and quirky clothes on your doorstop.

Hobo’s is the original vintage shop in Swansea. It specialises in retro style clothing, selling several items from the vintage inspired brand ‘pop boutique’ as well as original vintage items. Hobo’s is perfect for students looking for something a bit unusual at a good price and it even offers 10% student discount! The shop lies on Oxford Street in the city centre and is joined to skate shop ‘Exist’ if you want to mix up your style a bit. Although only small, Hobo’s is packed with vintage items for guys and girls as well as cool gifts and cards.

Waxy Bramble is a new addition to Swansea’s vintage scene. Opened a year ago by mother and daughter Pat and Jen Andrews, the shop caters for men and women and there are even a few bits for children. Pat says that most of the clothes stocked in the shop come from the 60s to the 90s and they’re always happy to find something from any earlier. Pat and Jen are both passionate about the environment, so much of the shop comes from natural materials and they don’t use plastic bags; make a purchase from Waxy Bramble and instead you’ll get a quirky homemade, reusable bag. Pat says they ‘source a lot of clothes abroad, and in Wales!’ so you might even end up with an individual piece from not too far away. The shop is situated on Beach Street in Swansea, just outside the city centre.

UnDone is the newest vintage store in Swansea since fashion graduate, Katie Hern, followed her dreams and set up shop in November 2013. The shop is a stunning space slightly hidden away from the main hustle and bustle, just off Bryn-y-Mor road. Not only does this boutique offer stylish one off pieces, (perhaps perfect for a graduation or summer ball outfit) but it also offers homewear and gorgeous accessories. Katie says a lot of the pieces follow a ‘parisian theme,’ and she takes inspiration from Edwardian and Victorian eras.

As the interest in vintage fashion increases, as does the availability on the high street; the old and new additions to the vintage scene provide a wide variety of options for men and women alike. Vintage style is perfect for all students and usually available at a great price. Swansea Charity Fashion show, which has been organised by students from Swansea University is set to show just how well student style and vintage fit together and if you’re still not getting enough vintage make sure to check out charity shops and the regular vintage fairs held at Noah’s Yard in Uplands! 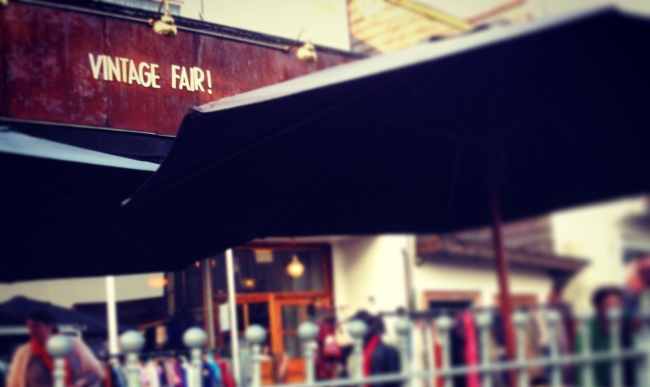 Fashion at University is a major thing, but most students find it difficult to keep up with trends when they barely have enough money to keep food in the fridge; especially when University fees have almost tripled and living costs are constantly on the up. Alex Hawes, a 3rd year at Swansea University says that ‘in most cases I have to sacrifice fashion and trendiness to save money at University,’ and this is not uncommon. George Chesser, another student made it quite clear this is how he feels when he said ‘I only buy the essentials, like socks!’

It is possible to stay stylish at Uni without having to break the bank though, just follow the advice of these students.

Alex’s favourite shop in Swansea is USC and he says he tends to wait until he has ‘enough money to spend on a few items there.’ Fortunately USC in Swansea always has great deals on and you can buy two pairs of Soul Cal jeans for £30; there’s no need to save with prices like that.

For many students, like Ellie Parker and George Powell who both study English, jeans are their one must have item. Ellie normally buys her clothes from H&M where girls can buy a pair of skinny jeans for only £9.99. George buys his jeans for a bit more money from Next but says ‘they’re still reasonably priced and really good quality.’ This is important if, like George, your jeans are going to be a staple for lectures and nights out.

Fiona Newberry says that for students, shopping at somewhere like H&M and New Look is the only option because they’re the ‘most affordable,’ and still sell on trend clothes for day and night. Jazmin Kopotsha, who loves to go out, agrees that New Look is the best place for girls to shop. She says they ‘do the basics as well as nice stuff,’ and that she ‘is willing to spend the money to stay fashionable, but only on evening and party wear.’

For most students a night out is the time to dress themselves up and it’s important to keep up to date with trends amongst friends. In Swansea, high heels for girls are a big no-no. With the stairs in Sin City and the cobbles on Wind Street they hold a serious chance of injury if you risk them, but for some girls, they’re an absolute must. Jazmin’s advice to girls in this situation is to go for a heeled boot. She says, ‘they’re a bit more sturdy, but they still give you extra height and they look really good.’

New Look have a great basic pair for just £24.99, but if you’re looking for something a bit different take a look at Jazmin’s collection.

So from the students themselves, three top tips to stay stylish at Uni:
– Jeans are a must; team them with a casual jumper in the day and a shirt or blouse at night.
– Chelsea boots or any other heeled boots are great on a night out and a good way to avoid the risks of stilettos.
– The best shops in Swansea on a student budget are H&M and New Look (but don’t be afraid to look around for something that suits you more and splash out a little bit on the most important items.)